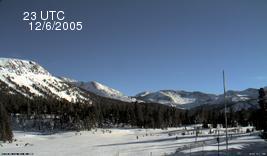 TUOLUMNE MEADOWS – WINTER CONDITIONS UPDATE
December 2, 2005
WEATHER: from previous week
High temp: 37° (November 30)
Low temp: 5° (November 28)
New Snow: 43” (Nov 29, 30 & Dec 1)
Total settled snow depth: 36” (Dec 2)
SKI CONDITIONS: The door to the backcountry has been opened with several feet of heavy snow to cover many of the non-ski friendly objects.
AVALANCHE/SNOW CONDITIONS: (above 8000’) Avalanche danger is HIGH.
DISCUSSION: With 2-3 feet of new snow in the last 24 hours avalanche potential is always HIGH. The snow is very heavy (3.35” of water content in the last 32”of snow fall) so it should settle or set up quickly. The lingering and highest avalanche potential will be where few anchors (like trees and boulders) exist. In the Tuolumne area those anchorless slopes are bare granite slopes, in other areas they may be grass or scree slopes. Also be alert on north slopes, particularly above 9000’, where weeks old snow has developed a ground level depth hoar (evident as loosely bonded sugary snow). This depth hoar layer may haunt us for some time in the pockets where it is well developed. Be suspicious of depth hoar in those areas you’ve been eyeing for the last month waiting for just a little more snow coverage.
Our duties have transitioned quickly from the road to the snow so we have not had a chance to check out snow conditions as closely as we would like. Here are some sources for snow and weather conditions. www.csac.org ,through this site you can access the avalanche centers and information including the Truckee avalanche center and the Bardini foundation for the eastern Sierra. An exciting new site is www.esavalanche.org which is the EASTERN SIERRA AVALANCHE CENTER based out of Mammoth Lakes California. This is their first year of operation but their expertise and depth of information should make them the first stop for any backcountry users. They are a non-profit, membership and privately funded organization so we encourage you to check them out. If you like what you see make it your avalanche center. This is also a good time to remind you that the avalanche reports on the Tuolumne Update are based on our observations and limited to the ski radius of the Tuolumne area.
WILDLIFE: Once again it is easy to tell who our neighbors are as Pine Martins, Coyotes, Squirrels and others leave tracks of their whereabouts.
QUESTIONS: If you have any ski related questions feel free to call (209) 372-0450 between 8:00 am and 8:00 pm. If we are out skiing, leave a message and a clear phone number so we can return your call. (Tracey & Bruce, Tuolumne Winter Rangers)